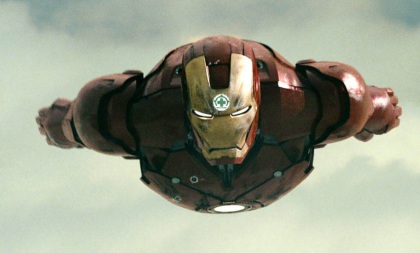 Ironman 2 came out on May 5th in the USA, yet Mark Hoffman, a collaborator with Comandos de Salvamento since 1996 as an EMT, will becoming a real Ironman for the first time by competing in the Ironman triathlon June 27th in Cour d’Alene Idaho.  More than 2500 athletes are registered to swim the required 2.4 miles, 112 mile bike, and then run a marathon of 26.2. Mark lived between Comunidad Iberia, Mejicanos, and the Central Base of Comandos until 2001 and founded the website in 1999.

All participants have to finish the course within 17 hours (7am to midnight). Mark will be crossing the finish line carrying the infamous Comandos de Salvamento flag to show the international community the history and work CDS has done for the Salvadoran people over the last five decades. Mark has been training up to 20 hours a week since last November. 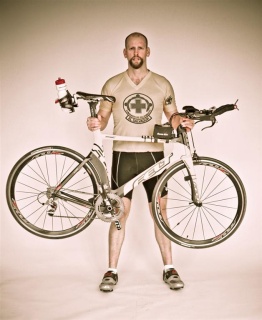 How did you get into triathlons?

I was diagnosed with an acoustic neuroma, a benign skull based tumor inside my left vestibular nerve. It was compressing against my cerebellum and therefore was life threatening. I had it taken out via endoscope in Los Angeles. It took my left side hearing and as a result I became single side deaf. Recovery took about 3 months, yet I entered a well of depression for not partaking in the “stereo” hearing world anymore. My last trip to San Salvador was a blast, yet distinct. The downtown noise of the hula hula was overwhelming compared to hearing the “bulla” in stereo.

I have an Ironman friend who convinced me to try a sprint triathlon the summer of 2007.  I about drowned, was dizzy on the bike and felt like a wounded moose shot through the lung on the run. I finished by winning last place! That experience drove me to formulate a personal goal of finishing an Ironman in 2010. I have finished 2 marathons and 2 half marathons. I did a half iron in Chelan last summer. That kicked my tulo because of the heat and lack of training. It was a humbling experience.

What does Ironman consist of?

I have to finish the “race” within 17 hours or they pull me from the course since health problems can arise fast. The gun goes off at 7am and the race ends at 12am. It’s very necessary to keep your heart rate low to medium the whole race or you will burn out.

Nutrition and hydration is also very important. You have to find a balance because if you eat to many solids, stomach problems start and therefore dehydration. I have a plan to use a mix of accelerade/endurox along with powerbars. I just want to finish, and as my friend Brian says, “not get an I.V. in the med tent” at the end.

Why Ironman for Comandos de Salvamento?

Since meeting the Comandos in 1996, I have been absolutely amazed with their work, the oral histories, and experiences from veterans like Mayen, Johny, and Leiva. From stories about the role of EMS during Civil War, natural disasters, street riots, etc. The have dealt with a lot of stressful situations over the years. A recent example are the recovery efforts that took place in Verapaz during tropical storm Ida last November. They have a special kind resiliency acquired through consistent didactic and real life training. That’s what it takes to complete an Ironman. It not only takes physical resilience, but mental and spiritual resolve.

This is why I am dedicating my first IM to them. By crossing the finish line holding the flag of the Comandos, the same symbol used in Civil war while rescuing civilians or managing peace during street riots under a hail of rocks and tear gas. Managing peace during a street riot? I guess I should say managing chaos. The Comandos are the founders of Chaos Management perhaps. The flag has been a symbol of neutrality under contexts of extreme polarization. For almost 50 years, It is a symbol of protection and security offered to those in need under incredible circumstances.

Could you expand on any oral histories you have heard?

When I say Oral histories, I mean the common, or sometimes uncommon situation a typical Comando EMS worker may find him/herself and therefore become the institutions walking history books.  Powerful events, like moments of tradgedy that Jhony told me when aviateca crashed in 96. Or the time when an MVA resulted in 2 DOAs, one being pregnant, and a Comando borrowed a machete from a local campesino in the crowd, and did a quick caesarian -saving the baby. Or Leiva telling me his experience on a psychiatric run with a female patient that exhibited acute psychosis. He was trying to talk her down. She was threatening her infant with a knife thinking it was the devil. Leiva mentioned that particular emergency call did not end well.. The Comandos have been witnesses to growth pains the country has and continues to go through.

Stories like these any Comando could tell you. “Cosas de pelicula” as they say in El Salvador. 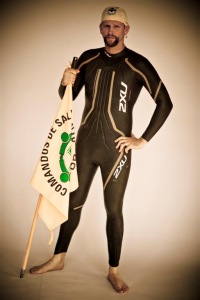 And what about your life in general?

Well, 2010 is my year. Turning 40, and becoming a dad for the first time, ditto for becoming Ironman, and Comandos de Salvamento having their 50th anniversary this year. I want to share this “IM” experience with them and be the “puramengambrea” because right now I am “feliz como un lombriz”.

Mark is trying to obtain donations for Comandos de Salvamento by raising awareness of their work by doing IRONMAN.

Financial donations are accepted through paypal to donations@salvamento.org or by clicking DONATE above left.

If you want to donate medical or EMS equipment please contact him at marco@salvamento.org