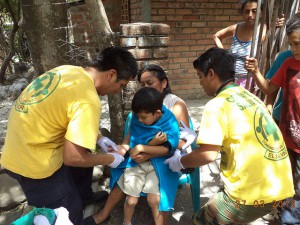 63yo Gerardo Barrios and 34yo Yanira Barrios were attended to by comandos de salvamento after their vehicle malfunctioned causing an accident on what is known as the curve of papaturro. The patients were stabilized and transported to la Unidad de salud in La Libertad. Foto: CDS