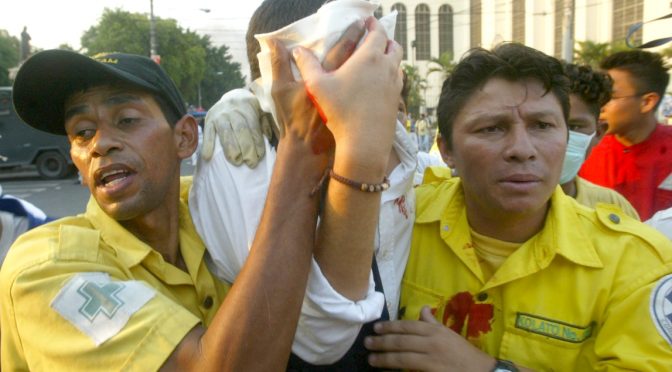 Today we lost one of our most cherished veteran first-responders. So much was his greatness that only his humility and courage surpassed it. We saw him carry wounded children, men and women amid shootings and tear gas during civil unrest and civil war.

He had an unwavering spirit of service. Manuel Funes “El Colera” as we affectionately called him in within our ranks.

The Board of Directors of Comandos de Salvamento regret the death of our colleague and friend who for many years wore the yellow uniform dedicating his time to the service of others.

I first met Manuel in 1996 as he trained me to be a first-responder “estilo Comando” while embedded with Comandos de Salvamento at their main base in San Salvador. During street protests and riots, he taught me to always bring civilians to “our” ambulance instead of “their ambulance”, “because we will never see them again if you don’t Marko.”  We also worked side by side in Bajo Lempa during Hurricane Mitch Evacuations and recovering the dead in January 2001, at the first true ground zero of 2001 where an earthquake caused a landslide to cover 800 homes.
His sense of humor helped a lot of us that day. We will miss you COLERA!”