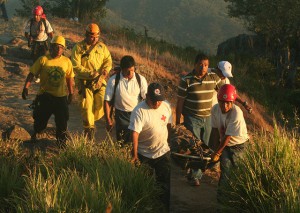 EMS Recovery crews from CDS and Salvadoran Red Cross recover the body of a female that committed suicide by jumping off the face of Puerta de Diablo, south of San Salvador. Recovery efforts took a long time due to the 30 meter height of the precipice.

Redacción Diario Co Latino report Translation by Marco Forty year old Delhi Mabel de Montes took her own life this Thursday when she jumped off the highest cliff of the Devil’s door at Los Planes de Renderos. According to preliminary reports from search and recovery teams, the woman was a nurse at the psychiatric hospital and is from Tonacatepeque. Circumstances that led to the suicide remain unknown.  The National Civilian Police are investigating a motive. However, it is known that the sixteen year old daughter of Delmi was disappeared and this circumstance made her very depressed. EMS crews have informed that before jumping off the ledge, she had called friends at work to inform them of her decision to take her own life. This Friday, recovery teams from the Red Cross, Comandos de Salvamento and the PNC worked since 10 am to recover the cadaver that was in a difficult zone to access.