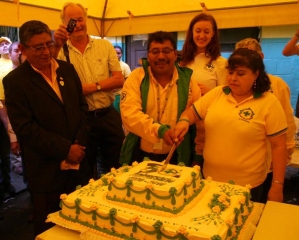 The day included a visit to Mass at a local church and a ceremony of recognition at the General Assembly in San Salvador. Those in attendance included Per Renestad of People’s Norwegian Aid and other internationalists, the board of CDS, and volunteers.

Nine year old Comando volunteer Jensy Gabriela Ayala Torres, from the Nejapa base started the ceremony with leading the Comandos de Salvamento prayer. Jensy has been with the Comandos since she was six by serving in our northern San Salvador bases. She is the niece of Alex Torres, leader of the Nejapa base. On December 10th 2008, after covering an EMS situation that involved fireworks in Quezaltepeque, Jensy was involved in a line of duty traffic accident that involved her ambulance and other EMS workers. Although she was injured, she was able to fully recover and continue serving the community through CDS. 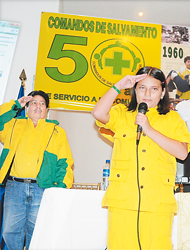 Later that day at the Central Base of CDS there was a party and plenty of Cake to go around.

The FMLN government asked for honorable mention be given to CDS.

On a side note, the Flintstones also turned 50 the same day.