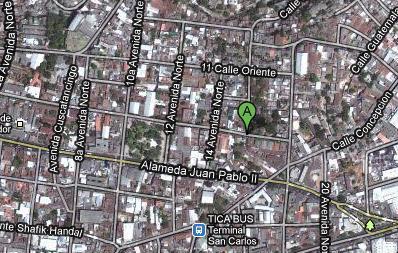 At night when most are at home asleep, others are helping people in need, EMS workers at the ready to assist those in trouble.

The main base of Comandos de Salvamento is always ready, “siempre pendiente”, in Spanish. Nine members of the night shift at the Comandos on the night of November 16th are prepared for any event.

With clean uniforms, vehicles, and CB radios, the first call happens at 6:50 pm. The female caller informing dispatch that there was a passed out elderly female downtown near the national palace.

Within seconds, leader of the night shift Rafael Polanco and four EMS workers take off and within five minutes are attending to the patient who was identified as Jeannete Ramírez Rodríguez. Symptoms were syncope and anxiety.

After a basic examination, Polanco decides to transport the patient to FOSALUD in San Jacinto. They arrive at 7:09pm. During transport and with symptoms of acute sorrow and unconsciousness, Jeannete states that she has a history of anxiety episodes. Ten minutes later, the brigade arrives back to the “base cental”.

Some workers opt in for dinner, a pair of pupusas to calm their hunger.

At 7:25pm, another group of volunteers leave on a medical emergency run. There is no report that it is an acute situation.

At 7:45 the main base receives a walk in patient, a youth presenting with an injured abdomen and contusions resulting from an assault along the Independencia Avenue when others robbed his backpack. When the patient decided to fight back when they tried to take his cellular phones, he was beat up. The patient was triaged and immediately transported to the Hospital Rosales  ER.

Upon returning to the main base, between conversations and distractions on the base television, dispatch receives another call. An MVA near Metrosur along Avenue Juan Pablo II. “Move it now, it seems to be a bad one” advises Polanco to the driver. This is one volunteers first run.

Five minutes later, it appears that Red Cross is attending to the female patient who was on a motorcycle. Polanco states, “Seeing another EMS agency already offering treatment, we don’t get involved as we did before”. However two volunteers already get out which generates a slight misunderstanding, one of them is the trainee. They then return to the base.

At 8:45, it is calm. The main branch of the Comandos is located in the heart of the capitol, in the red light district and most violent area of the city.

Polanco gives the order to gather around and pay attention so that he can evaluate the nights operations so far and give orders. There are two very young volunteers that are only allowed to stay until 10pm.

The rest stay prepared for whatever emergency arises the rest of the night, and Polanco reviews some quality control and best practice issues with the volunteers.

“The main objective is to help people“, a veteran states out-loud.

It was discussed why two of the volunteers got out of the ambulance at the motorcycle accident where Red Cross had already been attending to the patient. Polanco reiterates, “When we see another EMS agency already giving treatment, we do not get involved“. One of the volunteers tries to justify trying to help. “We are taught to assist others “, he states. It is brought to the attention to all that Comandos also offers scene security and traffic control.  Polanco lets him speak and the group arrives at the conclusion that the fundamental reason was to offer help to the EMS group already on scene, and not to interrupt their work.

The rest of the night passes without incident. Most of the calls happened when their was more traffic in the streets. Near the end of the year, CDS is always alert for emergencies, but also take an active role in education and prevention. The Central Base is an oasis and refuge to the dangers of the night.